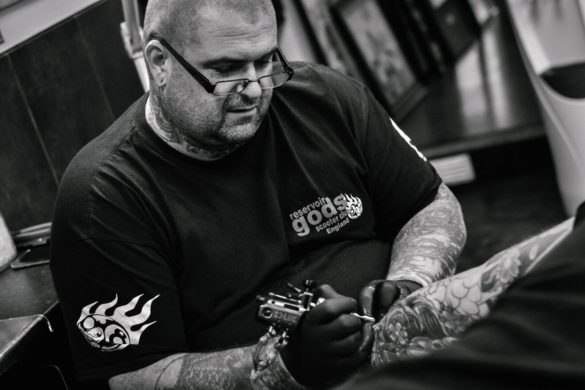 Sean Evett started tattooing in 1987 at the age of 15 when he used to hang around a tattoo studio helping to do line drawings and general cleaning up. Soon he was lucky enough to get hold of some machines and ink and began tattooing his friends during lunch hour and in the evenings, but soon became very unpopular with their parents and the teachers.

Sean left school when he was 15 ½ years old and was lucky enough to get a job as a trainee engraver but this was not enough for him as he knew he wanted just to engrave skin. At 16-17 years old he started working in a seaside resort tattoo studio helping out an oldtimer and started getting really busy tattooing in his spare time.

By the age of 19 Sean opened his first tattoo studio in Bridgwater Somerset which was situated on the A39. He met another tattoo artist who became and has remained to this day a very good trusted friend, Keith “Bics” Bickle. Sean was invited to go and work at his studio “Fantasy Tattooing” in Peckham, South London and soon began to share his work time between the two shops. Sean kept his Bridgwater shop open for three years but decided to close it due to unforeseen circumstances.

Sean continued tattooing in many other tattoo studios until a friend opened a studio in Taunton but lacked experience. Sean agreed to help him out but after six years decided it was time to move on. Immediately he started to work at L+B Tattoos back in Bridgewater where he stayed for seven years. Deep down Sean knew he wanted more from tattooing than this and had been working at Bics studio in Sweden and also travelled in the USA seeing how tattooing was progressing and decided to put this into practise himself. Sean continues to this day to travel to Keith´s studio “Exclusive Tattoos” in Karlstad, Sweden and do “guest spots” where he have started to gain his own regular customers. In August 2009 Sean decided it was time again to open his own studio again. Street is a beautiful village in Somerset which is easy to get to from all main Somerset towns and this is where he decided that he was going to open his second studio.

As a mark of a long and valued friendship it was agreed that Sean would twin his studio with Bics studio in Karlstad.

As with the twinned studio in Karlstad Sean will be having guest artists at the studio in Street. These guest artists will have a high quality of work and come from studios in their home towns in UK, Austria, America and sweden. Check out the website regularly for the dates of guest artists. 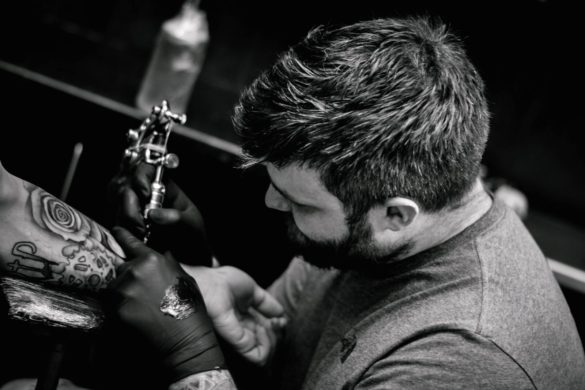 Bens interest in art started through a love of graffiti art. He started taking commissions for various murals including some large pieces in towns and cities. Ben has been teaching art for the last three years but has always had a love of tattooing so in early 2016 he went part time at the school and started an apprenticeship with Sean. I think you will agree from his portfolio he has already got to the stage of putting out some excellent work and looks to just get better and better as he progresses.